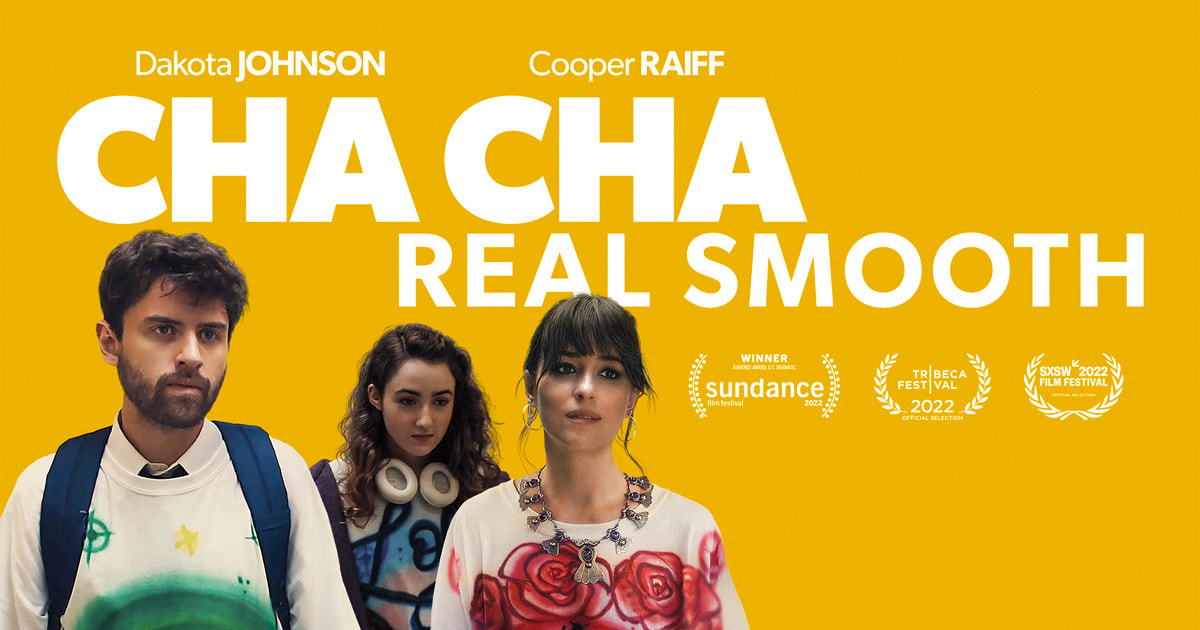 When I first heard about Cha Cha Real Smooth, I knew I wanted to see it. And not just because of Dakota Johnson. After Sundance this year, every single review I encountered for it was accompanied by either a 4 star or a 5 star rating, which led me to believe that it may be being over-hyped. But oh, how wrong I was. My instincts were correct all along: this is my type of movie.

Titled with reference to that seminal classic by DJ Casper, Cha Cha Real Smooth was written, edited, produced and directed by Cooper Raiff; a movie wonder boy of sorts, who seems to be able to do everything already… at the age of 25. Oh, did I mention he’s also one of the main characters? Indeed, here he plays 22-year old college graduate Andrew, who returns to his native New Jersey without any clear plans for his future. In a bid to earn some cash, he starts a career as a ‘party starter’ for bar/bat mitzvahs, where he befriends a mysterious young mother (Johnson) and her teenager daughter (played by Vanessa Burghardt in her first film role).

A movie about not knowing what the fuck you’re doing after college and just floating through the world in the hope you’ll find some sort of purpose? I feel very attacked right now. How dare you, Cooper Raiff?

Aside from finding Cha Cha Real Smooth extremely relatable, it was just so refreshing to see a heterosexual romance that I could actually get on board with. Although, upon reflection, maybe that’s because it’s not quite a romance by definition? Anyway, Raiff did a really good job here writing dialogue that is definitely quirky but also realistic. It’s a very, very subtle and mellow film in tone, but it’s just oh so pleasing to watch. It is, quite simply, one of those sweet, indie genre films that I can’t help but love.

Honestly, Raiff choosing Dakota Johnson as his scene partner is his master stroke above all others. She has the perfect vibe for this type of movie and the exact right amount of charisma and a sense of enigmatic charm about her, making it really easy to understand the fascination young Andrew character has with her. All of the cast are absolutely fantastic, in all fairness, and Burghardt as Lola is flawless in her debut.

Though there’s not much of a plot, it’s really nice that the story doesn’t end up exactly going the way you expected, which is a really nice parallel to the real life story it’s trying to portray, actually. Technically there are some lovely things about this too. One of my favourite things was unsurprisingly the original score which was co-written by the very talented Este Haim, and the simplicity of the muted colour palette paired with simple yet inventive shots made this movie very much my cup of tea.

When it comes down to it, this whole film just made me very excited to see what Cooper Raiff does next. Hopefully with him being such a young filmmaker we have a lot more of his work to look forward to. Perhaps I’m a tad biased, since Cha Cha Real Smooth is pretty much bang in the middle of my wheelhouse, but you know what? I don’t care. I’d recommend it tenfold. ONE HOP THIS TIME!

Cha Cha Real Smooth is available to stream on Apple TV+ in the UK.