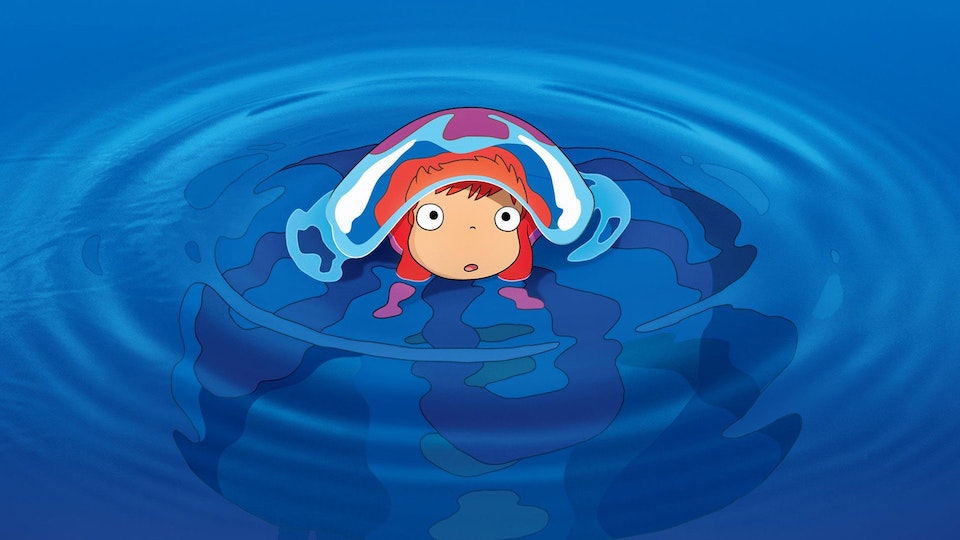 In 2008, Disney Pixar released WALL-E. That’s right, when Studio Ghibli were releasing this cute little 2-D hand drawn movie, the biggest animated movie studio in the world were putting out full-blown three dimensional computer-generated blockbusters set in space, of all places. And yet, Ponyo still drew huge audiences, more than sextupling its budget at the box office. Turned out this ‘old-fashioned’ way of creating animated movies wasn’t quite dead yet.

Like with many Ghibli films, Ponyo is surrounded by themes of fantasy and magic. This time, we focus on a five year old boy named Sosuke, who one day finds a goldfish trapped in a bottle on the beach. After naming her ‘Ponyo’ and losing her at sea, Sosuke is amazed to find Ponyo again one day, except this time she has transformed into a little human girl. In using her mystical powers to change her species, she sets off an imbalance in the world, which subjects the town where Sosuke lives to dangerous floods.

Yeah, I don’t know how I’ve gone so long without seeing this one either, especially since I’ve seen quite a few other Ghibli films… Don’t @ me.

If I were to be completely honest, I’d say I didn’t really expect to enjoy this one very much. Don’t ask me why, it always just appeared to be a lot more childish and aimed solely at kids than the majority of Ghibli works. After watching, it is easy to deduce that no, it doesn’t quite have as strong a message as others, and yes, it kind of is more childish than the likes of Princess Mononoke for example, but overall the plot is just as magical and as sweet as many other Miyazaki movies.

In the English dub, we are graced with the vocal talents of superstars such as Cate Blanchett and Liam Neeson. But let me tell you, no one can steal a show quite like Lily Tomlin. It’s only a minor voice performance and yet the comedic tone she brings to her relatively small role is brilliant. It is actually insane how perfect she is in this film.

As with the majority of Ghibli’s catalogue, the animation itself is wonderful. Once again though, the hand-drawn background scenery is the stand out – this style will never cease to amaze. On top of that, Joe Hisaishi returns with a magical, enchanting score that any fan would love to listen to on vinyl. (Yes, I’m referring to myself here.)

On the whole, whilst the plot is adorable and the visuals are as beautiful as ever, it did feel like the story itself struggled to fill its 100 minute runtime. Though Ponyo is not even in my top 3 films by this studio, it fits snuggly into the “better than average animated movies” category with ease.

Ponyo is currently available to stream on Netflix in the UK.