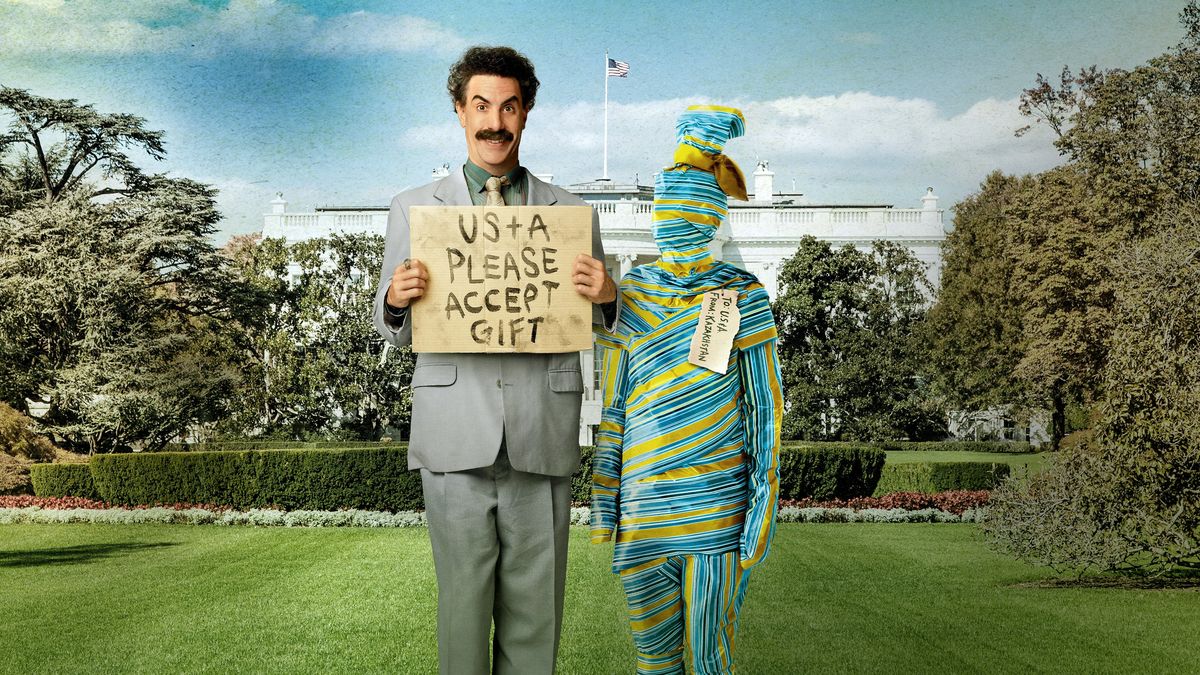 Remember the good old days in 2006 when Sandi Thom was singing about being a punk rocker with flowers in her hair? When Scissor Sisters burst onto the scene with “I Don’t Feel Like Dancin’”? Well adjacent to that, Sacha Baron Cohen introduced his newest bizarre character to the world by releasing Borat in the same year. And now he’s back.

A few weeks back, Borat Subsequent Moviefilm somewhat shockingly picked up two Golden Globes for Best Motion Picture – Comedy and Best Actor – comedy. Even if you watched the Borat sequel beforehand, you were probably still shocked that neither Hamilton nor Andy Samberg picked up a win… I certainly was. But at the same time, it’s not difficult to understand why it did emerge victorious in the end.

Fourteen years after the original film, Cohen picks up where he left off. This time however, it’s his mission to create some sort of alliance between the nation of Kazakhstan and the USA. How will he do that? By gifting his daughter to then American Vice President, Mike Pence. Of course there were many pressing issues going on in 2020 and the team behind this movie ended up being caught in the midst of the coronavirus and the election race, both of which became an integral part of the movie.

In short, this is Cohen at his best: again blurring the lines between fiction and reality, except this time it’s almost completely set in the States. And I didn’t hate it! In fact, I almost believed I’d be really indifferent to it, but it instead became a pretty wild ride.

As preempted, Sacha Baron Cohen is as bonkers as he always is and I can’t actually believe he repeatedly has the balls to do any of this. However, credit where it’s due has to go to Maria Bakalova. What an incredible sport she is, and a comedic revelation. Sadly, I was correct in my prediction that the Golden Globe Bakalova was nominated for would go to Rosamund Pike, but I still stand on the belief that Bakalova fully deserved it.

What I didn’t expect was the extent to which Cohen exposed how utterly insane the USA is. I knew there would be some crazy shenanigans within this movie, but I wrongly thought it’d be no more than the leading man making jokes and pissing about on his travels. What is actually revealed is really kind of scary. So many of the people present here have no idea that it’s all a set up to the point where some Trumpers tell the cameras that they believe the Clintons drink the blood of children… If that was part of a fictional script it would be cut out because it would be “too unrealistic”, and yet here it is being said in a completely serious tone in real life. Madness.

Cohen being no-holds-barred, the actual fucking audacity of these people for fooling Giuliani like that is the highlight of the film. Possibly the most iconic moment of 2020.

As you may have picked up on, this surprised me quite a lot! I thought I’d be completely indifferent but there was a surprisingly cohesive plot, top notch satire and some genuinely fearless performances.

I draw the line at a Borat 3 though. Please don’t.

Borat Subsequent Moviefilm is available to stream on Amazon Prime Video in the UK.