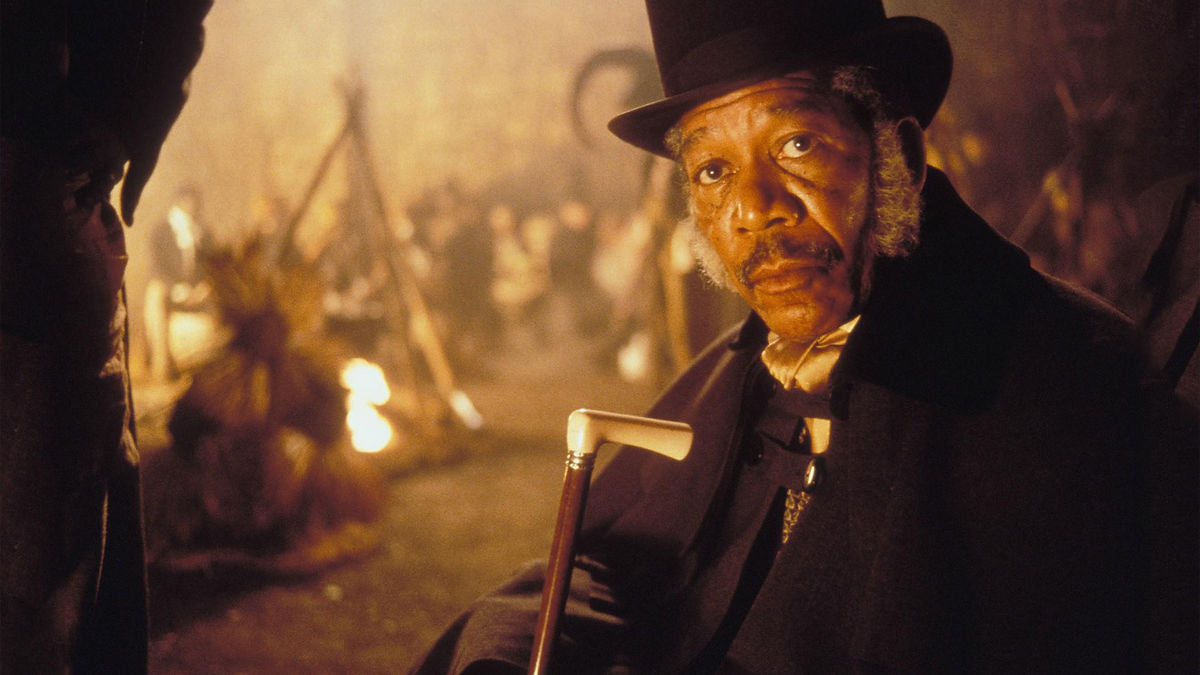 You may recall that I recently reviewed Minority Report and vowed to watch more Spielberg films. Well, guess what? I immediately forgot I said that as soon as I finished it. But now we’re back with him. Yay!

Amistad is based on a the true story of slave ship ‘The Amistad’ that set sail in 1839 to America. Most of the film centres on Cinque, an African man who speaks absolutely no English and was a free man in his homeland until he was captured by men who sold him to the Americans. The slaves on board are held as prisoners and their release is hotly contested in court by confederates who believe they should remain as slaves. A couple of lawyers step in – as does former President John Quincy Adams – to defend the men, women and children, as Cinque becomes the leader of the pack who works with the lawyers in an attempt to ensure they are freed and returned home.

The one thing that is mildly irritating about Steven Spielberg is that he loves a long movie. At 155 minutes, Amistad is no exception. To that, I ask: Why it gotta be so long, Steven? This time though, I’ll forgive the man, because this is a complex story that deserves to be told properly.

The truth is, this film won’t be for everyone. If you have no interest in American history or African American history whatsoever, you’ll probably find it difficult to get through. For me (a nerd), it was a well constructed and well plotted look at a moment from the past and although it romanticises the white man’s effort to ensure freedom to an extent, there’s at least some truth and accuracy to what is portrayed here.

Aside from that, acknowledgement of America’s questionable past on screen in 1997 was groundbreaking enough on its own and the plight of the slaves is never downplayed. In fact, supporting actor Morgan Freeman took note in an interview that some scenes were so graphic and wince-inducing that he thought they were “overwrought”. He later explains though that Spielberg thought they were necessary to make a point, and indeed, that’s what a good storyteller does: draws out emotions in the viewer that they may not want to feel. In short, let this be your trigger warning.

Other than these noted horrific sequences, the most striking element in terms of visuals for me was the exquisite costumes. The fact that this didn’t win the Academy Award over Titanic is absolutely beyond me.

And wearing those costumes? What. A. Cast. Of course this is Spielberg and you’d except no less, but Anthony Hopkins, Pete Postlethwaite and Djimon Hounsou are all beyond excellent in this film. The courtroom scenes – whilst quite stagey by nature – are fabulous, especially when Postlethwaite is at the forefront. He oozes class and bravado as he always did during his career. Spielberg even gets the best out of Matthew McConaughey, which can only be the mark of a great director, right? The sequence where he draws a map in the dirt was a particular standout, and tells you all you need to know about the characters in that one moment.

So it’s not the most thrilling movie you’ll ever see, but it’s a piece of coherent, moving storytelling, with remarkable and realistic visuals and a wonderfully haunting score by John Williams.

Not Spielberg’s most exciting movie – the dude made Jaws, after all – but it’s most certainly worth the watch.

Amistad is available to stream on Sky Cinema and Now TV in the UK.